The Melancholy of Suzumiya Haruhi (2006) 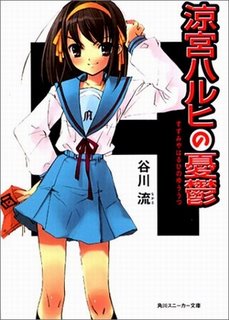 Now let's talk about another event anime of the year, The Melancholy of Suzumiya Haruhi. This anime first serialized in novels by Nagaru Tanigawa then very popular anime in middle of 2006 took the world of anime fandom by storm. Why and how it become so instantly appealing to viewers is matter of academic conjecture but it can summarize that few popular anime memes that used by it is very effective. First high proportion of female characters with stereotypes which is instantly recognizable to anime fans. Haruhi is a tsundere stock character, Yuki is silent, Rei Ayanami (Evangelion) type of mold and Mikuru the busty doormat girl. Second, typical sailor school uniform with high cut skirt then followed by various costumes from bunny girl suit to maid. Third, the anime even caters to fangirls and yaoi in shape of Itsuki the ever smiling male student. Four, the implied romantic between all principle players in the story, even Itsuki-Kyon angle. With all these popular stock characters in play, it is a good start for successful anime hook for audience. Then the story throws in most often used genre in this setting, from time traveler to alien-human interaction having a discourse with things like for example a space battle scenario ( a nod to Legend of Galactic Heroes), murder mystery (another tribute to Detective Conan or Case Closed) and sports anime. On top of that, a brilliant (or retarded, depending on your view) scrambled order of episodes to catch viewer's attention to find out more and more about the anime. It is a clever gimmick and admittedly it adds a strange charm to the otherwise already well planned anime. But what gives the anime strongest charm is inclusion of the very normal and down-to-earth Kyon who is doing fourth wall narration and voice of reason while reacting to various antics of the characters around him especially Haruhi.

This anime is about a normal student which only known as Kyon to audiences ( so audiences can insert their own name I suspected) encounter with 4 really strange people in his school. 3 very beautiful girls with different personalities and 1 handsome pleasant boy entered his life with a force of tidal wave and take Kyon to unwitting places. Haruhi is center of his roller coaster ride, an impetuous and bored female classmate. She is claimed by other 3 people that she is holding key to human singularity as she has ability to create reality as she pleased. When you have impetuous plus bored plus godlike ability, something funky will definitely happen. Which it did. For 14 episodes, viewers are subjected to Kyon's often exasperation of her antics and his discussion what is reality or not with out-of-the-world factors weighing on his mind in the process. Story wise the anime is fairly mundane but what makes it noticeable is scrambled ordering of episodes and no holes barred narration from Kyon which gives this anime an unique flavour. 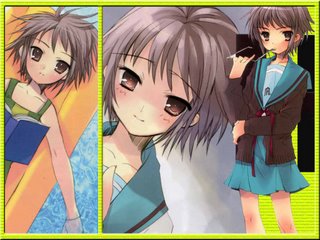 Now I only will comment on one scene of the anime which clinched my attention very well. The concert. Yes, the scene where Haruhi has to stand in for absent members of band in school festival is a highlight for me. If viewers look carefully, Haruhi hair become progressively wet from sweat of singing and her mouth movement is accurate to the lyrics of the song. Not to mention the guitar play is largely in sync with the song. This is a very impressive set piece scene by itself and deserve many viewing for sheer details of the art mastery. Bravo Kyoto Animation.

Other than that, the anime art is sufficient to convey what it needs to convey.

Haruhi insert songs used in concert scene are very catchy with “God Knows” and “Lost My Music” by Hiyano Aya the voice actress of Haruhi. The OP is standard whereas the ED “Hare Hare Yukai” is enhanced by infectious dance choreography by characters of the anime. The BGM of the anime is sufficient to accompany the mood of the show, not overwhelming it or underwhelm by it. The highlight of anime sound department is the insert songs by Hiyano Aya which quite talented and unique.

The Japanese voice acting of the series are excellent, each characters represented by voice actors and actresses who suitable for the role. Especially Aya Hirano who has a commanding presence in this aspect, her characterization of Haruhi is spot on and voice of Kyon also complimented her audacious aspect in the anime. 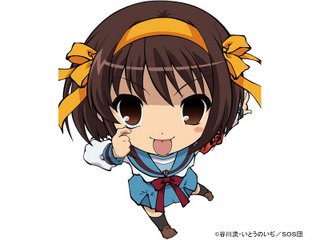 This anime ability to be different from other animes of the season due to unsual setting and technical mastery of the Kyoto Animation. The anime also make sure of its success by using all popular character stock to catch anime fans attention and popular memes like bunny girl costume to make anime fans happy. However, the anime decided to be episodic madness and did not really try to address the impasse between Haruhi and Kyon can frustating to some viewers. Someone complained that anime resolution is a pathetic ponytail hair which really did not push the story anywhere at all. As I mentioned in my comment, the anime appeal is Haruhi's impasse and inability to solve her issues then she decided to make her environment responsible for her dissatisfaction of her life. Perhaps some people who complained in this manner miss the point of the anime. Haruhi never meant to have any conclusion and her constant rampage with her issues is crux of the anime.

This anime deserve a viewing for standalone comedies and subtle brain teaser but any expectation of it have any conclusion should be cautioned as it did not really go in that direction. As for me, this anime has a fascinating discussion on human ascendancy and singularity; a rather humorous debate on order versus chaos, nature of man's nothingness and alienation, the absurdity of humanity and why are we here type of dilemma posed by Haruhi herself. It is decidedly non-serious in look but actually the topic discussed here is very pertinent and personal indeed.

The Melancholy of Suzumiya Haruhi is unusual anime but a ride worth to enjoy at least once. 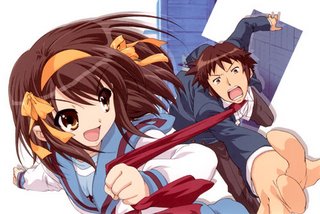 Posted by Unknown at 08:52 5 comments: Links to this post