Well, just more coverage on my country's cosplay scene. Nothing much to shout about, nothing less to scream in horror about. I have few friends who were into this hobby and it would seem that top cosplays is often gothic lolita genre. Quite a number of females are also into this anime, Saiyuki (anime interpretation of Journey to the West story)

This is their latest story. 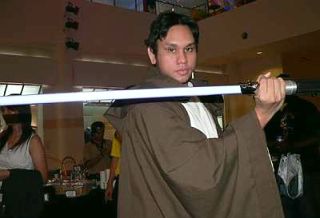 Dressing up in fancy costumes is no longer just child’s play. Nowadays it’s the adults who love to dress up as their favourite fictional characters. MICHAEL CHEANG takes a peek at the world of cosplaying.

HAVE you ever shared a men’s urinal with a sexy female anime character? Or seen Captain Jack Sparrow crossing the road at Jalan Bukit Bintang? How would you like to go to a party where you can see Wolverine sharing some sushi with an elf, a Jedi and a couple of zombies?

Son of anime master enters family trade
He may have a hit, but he's known as the other Miyazaki - Charles Solomon, New York Times
Sunday, October 22, 2006


(10-22) 04:00 PDT Koganei , Japan -- For Goro Miyazaki, the summer ended on a bittersweet note. This 39-year-old filmmaker had the pleasure of seeing his first movie, the animated feature "Gedo Senki," or "Tales From Earthsea," blossom into the biggest hit of the summer in Japan, as it rose to the top spot and took in more than 7.3 billion yen, about $61.4 million, by the end of September.

But even his success brought inevitable reminders that he is, after all, the other Miyazaki. His Oscar-winning father, Hayao, regarded by many critics as the greatest director working in animation today, has earned much more with his own hits. Ursula K. Le Guin, author of the popular "Earthsea" novels, on which the new film was based, went out of her way to make the distinction on her Web site, calling the father "a genius of the same caliber as Kurosawa or Fellini." She went on to complain about the liberties Goro and his new film took with her work.

Now I am still looking to watch the movie but looks like strained ego between father and son has taken into new heights. Why the author made such comparision is beyond me, but I do felt it flame more rivalry juice between them. The anime scene will be graced with the saga of Miyazaki family dispute. I would like to think that both will race with each other producing awesome anime movies that excite the world around us.
Posted by Unknown at 15:59 1 comment: Links to this post