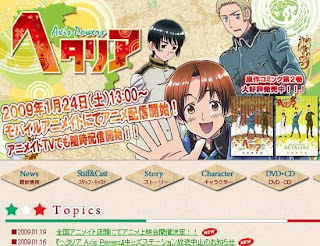 The madness continues when some Korean netizens actually advocating cyberwar on Japanese sites that is promoting Hetalia-Axis Powers. Not content with successful attempt to stop broadcast of the anime series, the zealous patriots now targetting Internet streams and channels to distrupt the anime. It is unprecendented that an act of war is mulled in response to an anime backlash, this has to be first example of serious byproduct in negative light from soft war ever. Frankly speaking, I don't know if I should cry or laugh about this.

Even famous Sankaku Complex which is very critical of Koreans in this affair did not escape the wrath of Korean netizens.

It once said that Korea is like a dagger pointing straight at Japan's heart.

A poster asked me to post this one too. I guess the street did not go one way here. Personally, I find the marketing distasteful and it is ironic if the real Nazis were there, these people would be put straight into gas chamber(s). Heh.
Posted by Unknown at 08:50 2 comments: Links to this post