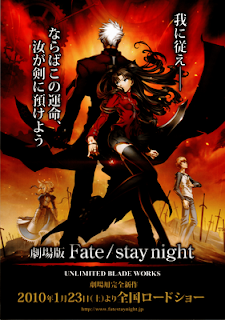 1 more month to Fate movie and poster is already released to announce its coming. I still have doubts about it since the production is the same as the series which not consistent in art direction and some weird scenes (the CG dragon). Slated for 23rd January 2010 release in Japan. The official site have the proper trailer up and looks spiffy. 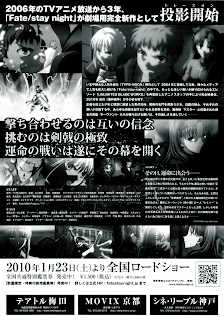 I wonder how they going to compress the story into movie format to be honest. But heck, I looking forward to see the sword spam between Shirou and Gilgamesh anyway.

anime
Posted by Unknown at 16:43 4 comments: Links to this post