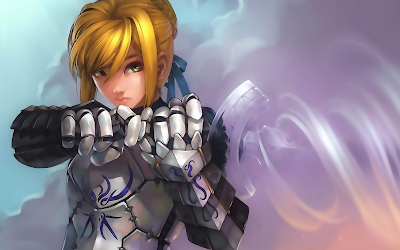 TYPEMOON and Ufotable has confirmed the adaptation of Fate Zero as anime and manga! YES! Finally after years of speculation, my prediction came out as reality. So far no news on casting, movie/OAD/TV series is out yet but it will be revealed May 2011 issue TYPEMOON ACE Vol 6. Director is Ei Aoki (あおき えい) whereas character designer by Tomonori Sudou (須藤友徳)and Atsushi Ikariya (碇谷敦).

After awesome work on Kara no Kyokai, I was hoping Ufotable will be doing more TYPEMOON stories and I was right. This time, I predicted fans will like charismatic and manly Rider (Alexander The Great) and very stern, serious Saber. Shirou's foster father will the main driving character for this story. Here we can see how ruthless and cold man he is, much to Saber's disapproval.