An Agoura Hills 10th-grader's passion for anime led to her recently performing with the Los Angeles Philharmonic as Yuna Braska, a character who appears in the anime video game series "Final Fantasy."

Fourteen-year-old Ashley Parish was picked from among hundreds of entrants to perform at the Hollywood Bowl on Sept. 21 in a special event celebrating anime music, from movies to videos.

Thousands of fans cheered on Parish and other winners, who performed in elaborate costumes as popular anime characters from video games. Anime, a shortened form of "animation," popularly refers to animation originating in Japan.

What attracts me to this article is participation of large scale musical group in conjunction with anime. It has come a long way.
Posted by Unknown at 22:33 No comments: 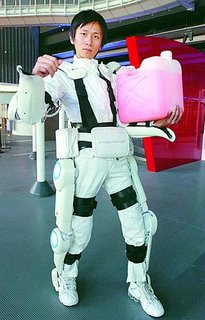 The main article is here.

The age of power armour is here, as an inventor in Japan ( what else) going to mass market this suit. Suddenly things that talked about in novels like Starship Trooper by Heinlein and featured in numerous anime mecha genre is taking shape in reality. Sooner or later, military and security application will find this suit irresistable and in this article, this very inventor refused a generous offer from Pentagon to build the suit for military application. US version known as BLEEX is noticeably bulkier and heavy than HAL-5.

Portents of future things to come?
Posted by Unknown at 22:17 No comments: