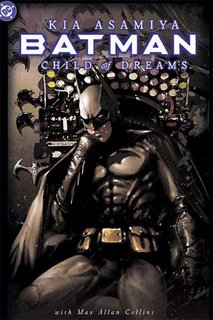 This is a review on synergy of Western and Japanese comic styling on one title. I haven't read this particular work and I was very intrigued to see how the combination goes. Could be a very good thing since I do believe that diversity is much more superior than one genre approach of all things.

I do hope more works like this will be common in future. Anyone for Alex Ross rendition of Pokemon? Hahahhahaa.

Serious note though, I always felt Japanese lack resolution in story department whereas US has predictability feel in comic storytelling. Perhaps such collaboration will bridge such weaknesses to create a truly impressive work of art to be enjoyed by all people. Maybe.
Posted by Unknown at 06:52 No comments: