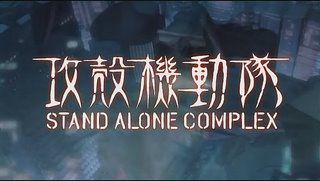 This is my 3rd review on the franchise, namely Ghost in the Shell: Stand Alone Complex, animated TV series started in 2002 and end its run in 2003.

Set in not too far dsytopian future of Japan, as outlined in politically heavy manga series by famous artist Masamune Shirow where technology has reach the stage where full replacement of human body is made possible by cyborg technology and more remarkably, the ability to retain human mind and consciousness in artificial brain which also can be hooked to cyberspace, directly via a port at back of the neck.

This anime occurs in parallel story within the universe, this series assumed Major Kusanagi is still around as separate and unique person working for Public Security no 9, an organization which is para-military and specializes within legal definition of permissible law, all in interest of national security of Japan. Led by bureaucrat master and stern moralist Aramaki, it is a micro organization which is meant to be backhand option for Japan leadership to get results semi legally or below that.

The focus here is on seemingly unconnected issue of corruption in highest echelon of government and civil disobedience campaign by a super hacker known as Laughing Man because he uses a smiley as disguise while conveying his message, remote hacking brains of high level officials in order to do so. All episodes are meant to be unified into single encompassing story but yet able to stand on its own hence the secondary title Stand Alone Complex. Unlike the lonely Puppet Master 2501 or mercenary Kim, Laughing Man is driven by justice and he is morally outraged by public complicity regarding a disease caused by high technology usage called the Murai Syndrome.

Section 9 got a whiff of him and at first decided to hunt him down but as their investigation gets deeper, they come close to gnawing corruption within the government. As the time runs out for the hacker, the government and even seemingly invincible Section 9, will justice prevails? Or condemned to be buried in official secrecy with Section 9 and Laughing Man as collateral?

Characters is basically the same from the movie adaptation, bisexually headstrong Major, smug but bitter Bateau or Batou, steadfast, idealistic Togusa and fatherly Aramaki plus host of minor characters like the mysterious sniper and a wise hacker. Not forgetting too, as clutch of comic relief comes in 9 AI mini tanks known collectively as Tachikoma. Their insatiable and childlike curiousity serves as amusement but has some very thought provoking dialogues to reflect their growing development of acquiring sense of self. However their development can cause them to be liability as primary weapon system as outlined in one of the important episode later on. Perhaps this is a way the creators of this series trying to insert humor since the humanoids in the narrative is too grim and cynical to be genuinely funny in nature. 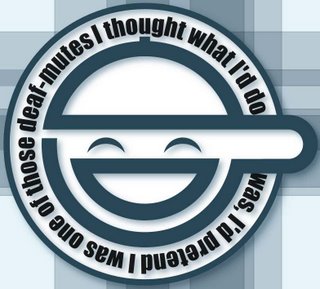 Art
Visually not as stunning and poetic as the 2 movies but nevertheless considering for TV series it is on high production value. Shown bi monthly for purposes of retaining consistent quality, the art is smooth, pleasing yet dark enough to induce the mood suitable for the story in progress. However for those who preferred the movie art established by first Ghost in the Shell movie in 1995, they might find the character design is too toned down and not strong enough to convey sense of artificiality as they are androids. Background is well done and there is little or no looping animation which reflects the high quality production.

Machinery is detailed enough, which highlighted by the AI tanks and tilt rotor primary dropship used by Section 9. Computer animation is used liberally but not to the point of overwhelming the traditional cell art like common issue with series from GONZO studio.

But in all fairness, the art in the series is better than most anime TV series out there and it is certainly not too shabby even compared to its movie cousin vis- a -vis. 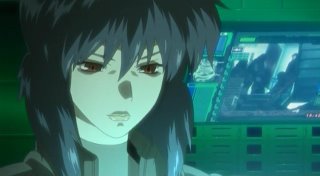 Sound
The soundtrack of the series fits the mood of the narrative power. Opening song, Inner Universe is very unique as it is sang in Russian which I felt appropriate as Russian language is very melodious and beautiful plus it is an entirely foreign tongue, reinforces the alienation of self from other which is the series underlying concept.

The OST is subtle, not too intrusive on the story progress. However, some scenes can benefit from stronger presence of background music for transitional from one scene to another scene. The ending theme is not bad, but there is nothing to shout about it.

Voice acting in Japanese is very professional, generally reflected the character well. Something about the voice acting of Japanese separates them from US or any other country is their level of training and dedication to make the character sound right. In this series, it is even more so since it is a serious series to begin with. A normal cutesy voice has no place in this series for humans but Tachikoma relish with cutesy voice somehow did not look out of place since they are not humans. Interesting dichotomy yes? 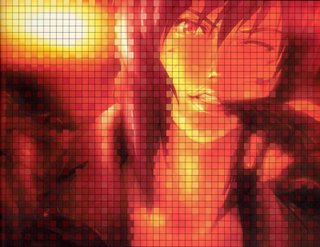 Presentation
Originally meant to be 26 episode anime series, the ratings is strong enough for investors to plunk in more money for second series, namely Ghost in the Shell: Stand Alone Complex Second Gig which just recently concluded its run in Japanese TV. This speaks volume about popularity of the franchise and this series did not disappoint at all. Delightfully deep and serious for discerning viewer, it has enough multilayered symbolisms to chew on and digest. Sophisticated and generally impatient for those who did not grasp it, the anime rushes into story while beguiling more intelligent viewer with well spun tale.

The story drew heavily from real life examples of Japanese symbiotic political economy corruption tie in like Recruit Scandal and Toshiba illegal technology transfer. Political activist like Laughing Man and bureaucrat incognito force like Section 9 is foil to this malaise that is affecting the Japanese society where corruption is so deep rooted that sometimes it looks impossible to be taken down. The story explored this theme and tries bravely to answer in acceptable manner. Sometimes the morality is blurred between pragmatic necessity and social justice. Perhaps this is real intention of the series in the first place.

Some episodes introducing characters in play and some episodes are in continuity, leading to the ultimate story arc, which is resolution of Laughing Man mystery. As mentioned earlier, each episode meant to be single story on its own except for the last few. The humor factor is an exclusive domain of the Tachikomas AI tanks with some penetrating insight into things with quotes like "I think God is zero!"

The pacing is much more fluid and quicker than the movies which are criticized as being too plodding and too infused with personal philosophy which alienated the audience. As secondary title suggested, it is meant to be concluded in one episode as much as possible thus, expanding more on the universe. For example we now knew that 2 World Wars has erupted and USA is a democratic imperialist like ancient Athens, which helps to shape as to why the political decision is as it is. Shirow's original vision is decidedly political and the series paid homage to it in spades.

All in all, this is one exceptional series of the great franchise and I will not hesitate to acquire the DVDs of it. 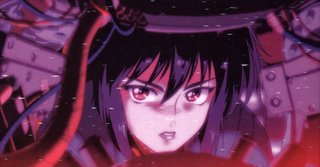