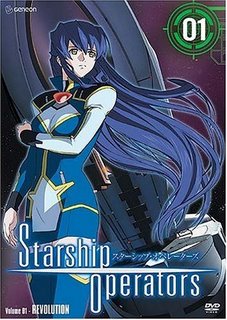 The year is 2300 CE and mankind has spread wide and far in galaxy, However mankind still visit their sins on themselves despite being so advanced race.

Starship Operators is about the 73rd class of the Defense Academy of the Planetary Government of Kibi. As they are returning home after the shakedown trial of Amateras, the newest military escort vessel of small but high tech Kibi Space Navy, they find that their home planet has been taken over by expansionist empire of Henrietta Galaxy Alliance of Planetary Nations which quite closely resembled on 20th century Nazi Germany. The cadets decided to fight back with the high tech Amateras but first they need resupply, logistics and political support since they are considered as space pirates. They turn to Hollywood's Galaxy Network for financial support in exchange for exclusive rights of tv reporting on their war effort to free Kibi from the Empire. The network embedded a pretty reporter, Dita Mirkob to give live coverage on the Amateras crew, led by charismatic if somewhat reluctant Shinon Kazuki, XO of the ship. Styled after reality shows like Survivor or Big Brother, it becomes an instant hit in the universe as people anxious to see how they would fare against the might of the Henrietta Alliance.

Since the ship was leased to Galaxy Network, the crew of the bridge was to be all female to attract more viewership and the producer was ruthless enough to engineer some events to spice up the program. Sound was incorporated for dramatization purposes and the battle is noted for intelligent use of realistic space physics and logical thinking. No Itano Missile Circus Barrage or Gundamsque space duels. Pure mathematics, multilevel thinking and logical solutions is the name of game to survive the space battles. This anime is a delight to hardcore science fiction fans as it as faithful to space physics as they can get, for example battles were fought over ranges like 900,000 km and usually it is based on calculations with timing, like torpedo firing solutions in submarine warfare. Most characters are realistic and they really bring forward their youthful enthusiasm for war. At least they are university student age, from 18-24 years old range and it is relief from teeny bopper age of Gundam lore.

However the anime tries very fast to push the plot, some people commented it is too hasty and choppy in some places in order to make a coherent plot. 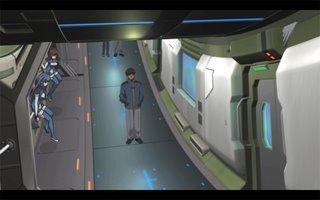 The art is adequate and fluid but it is not the mainstay of the anime. On its own, the drawing is adequate enough to tell the story but on pure anesthetic value did not rank itself amongst the best like Ghost in the Shell: Stand Alone Complex series. Characters are drawn with reasonable maturity and suitable for the purpose of the anime. Nothing cutesy and minimal fan service is great welcome as too many anime resorted to such cheap hook to get more audience to watch them. The CG fits where it should fit and the space battle did convey vast distance plus resulting isolation from traditional warmth of Earth in dark cold space. However in middle of the series, the art did went down little bit but it is not to a large degree. The art went back up as the story reaches its climax in the end.

In the end the art did measure to a reasonable quality for the story demanded.

The ending song by KOTOKO, Chini Kaeru ~on the Earth~ is very suitable and apt for the series mood. It is very melancholic yet soothing, a testament to KOTOKO's ability to bring out the various mood in this song to complement this anime. The opening, Radiance by Mami Kawada is too frantic and fast paced for the series so it is bit maladjusted to push the mood of the anime.

Kenji Kawai composed the soundtrack competently and in some parts it is the only thing to sustain the tension of the situation as it is battles fought in such distance that defied normal senses. Some slow scenes also benefited from properly inserted background music, really shows why Kenji Kawai is one of the best composers for anime series. However he has his lapses, as his composition for Ghost in the Shell: Stand Alone Complex shows.

I saw the whole series in Japanese and as expected the voice actors and actresses really bring out the character as I imagine them to be. Shinon sounded reluctant but decisive, instead of high pitch cutesy voice which will undone the seriousness of her character. As far as voice acting in Japanese concerned, no complaint here.

The anime lack of humor is understandable, the crew was placed in such perilous situation that is ridiculous for them to think any funny jokes at this point of time. Shinon reluctance to fight is clearly made but her dedication and skill make her a very endearing yet human personality. This anime is about her coming to age of her being, from potential recruit in the beginning into a full blown, highly respected strategist in the end. Other characters around her act as her conscience and foil, magnifying or reacted her actions.. The machinations of Henrietta Empire and later on Earth Federation also interesting but viewers have to fill in a lot of blanks as the action is not shown clear. It is often hinted or implied, thus this is might be reason why most mainstream crowd avoided this anime. Perhaps the writing should less technical as to not scare off people from this anime? Maybe.

The author really tried very hard to give the authentic feeling and logical, sensible touch to the story setting as much as he could. Things like all Henrietta's Empire warship named after famous naval battles reflecting their aggressive military culture to pervasiveness of reality TV show of Galaxy Network showed his research and good knowledge. Thus, it gives the anime a very real touch of what space age might look like in 300 years time from now. It is also an interesting comment of his believes that militarism produces absolutism that often led to corrupt abuse of power as shown in Henrirtta Empire revelation in the series. Something what happened Japanese Imperial Empire in World War 2. Needless to say, the combat strategy is quite plausible and this is few series actually tried to use 3D in devising combat tactics and strategy. Neat stuff.

Concise story, well thought out setting, sensible characters and purposeful storytelling make this anime very intelligent and makes it an acquired taste to enjoy it. I would not recommend this anime to anyone who looking out for action packed no brainer series though. However, if you looking for a series that actually respects your intelligence, get this anime fast. It is really worth it.

This anime is badly neglected by many fans which is sad. I thoroughly enjoyed this show, it is not as epic as Legend of Galactic Heroes or as polished as Banner of the Stars series but it has its moments and have deep, engaging story. Some parts might be a bit choppy but nevertheless the anime has rare quality which is a sense of purpose and satisfying ending. To me, the last 2 qualities is very important. 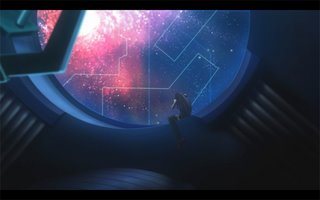 Hello Hello, this is my first post in anime commentaries. Now nothing come to my mind yet, will write something when something did come to my mind. Until then, stay tuned.
Posted by Unknown at 13:59 3 comments: