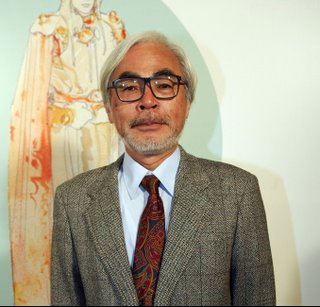 Senior Miyazaki, perhaps looking at the success of his son's work, "Gedo Senki/Tales of Earthsea" decided to make a return to animation world.

Now this is stuff which dramas made of. I wondered what motivates him to challenge his son in this arena that he proclaimed that he is retired? His psychological based on this would suggest a very competitive streak and perhaps a nod to his son's "mastery" by deciding to make a comeback to the arena.

His new movie is scheduled for 2008 screening, what story or title is secret. However according to some rumors, an old cafe in Kobe and views of it from mountain are scouted for research purposes. Also he adopted rather unsual production methods to make this new movie too. I wondered if he already prepared all of this before this is make known to public of his return.

More news on this rather interesting ongoing rivalry. As this news suggested, it has gained worldwide note too.
Posted by Unknown at 07:05 No comments: Links to this post