Korean animation has come a long way ever since, to beautiful Korean animated movie Wonderful Days back in 2005. But this clip is hilarious, I don't know where to start. Very crude and simplistic anime. However, majority of Japanese anime nowadays are animated in Korea, for example Black Lagoon.

But I cannot help but having a huge fit of laughter hearing Gundam but got VF-01 Valkyrie mecha part. I will put the video for nostalgia and humor factor.
Posted by Unknown at 15:26 No comments: Links to this post

Amazing, simply amazing. Simply versatile. (She is a voice actress for Haruhi Suzumiya)
Posted by Unknown at 08:56 No comments: Links to this post 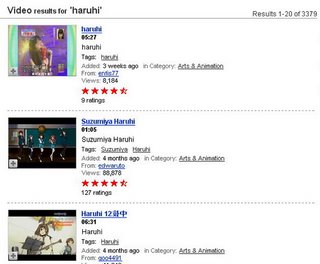 "Already, though, YouTube has become a major conduit of the popular buzz. A cartoon aired by a local TV station, The Melancholy of Haruhi Suzumiya, has become a national phenomenon, thanks to more than 2,000 related clips, including parodies, now available on YouTube. "We used to say 'Did you see this and that program on TV last night?' Since YouTube came, we can talk about it with more people," says Shunichi Kojima, a marketer for a mobile handset company. "I check the site just to keep up with the conversation." It will be interesting to see how long this conversation can survive, in a country that has been hard on Internet innovators".

A quote from this very illuminating article.

Perhaps looking from this 3000 over hits on YouTube on one single title, most awesome mainstream meme "infector". The Japanese Foreign Ministry team recommended to use anime as diplomacy tool thanks to this? It can stretched a bit too far here, I have to admit but the possibility is very interesting to say at least. Google knew what they are going for when they purchased USD$ 2 billion plus company that is only about 2 years old. Sure posting it up on YouTube is illegal now, but hey it is a free propaganda for Japanese image which tattered little bit by Koizumi's visits to Yasakuni Shrine. Goebbels would love this tool.

Interesting time for interesting happenings, I suppose.
Posted by Unknown at 08:25 No comments: Links to this post 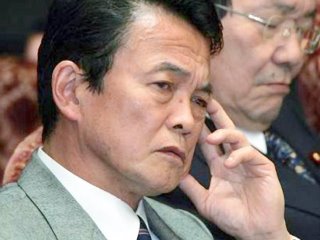 An advisory panel to Foreign Minister Taro Aso that was established to improve cooperation and understanding between Japan and other countries has drawn up a report proposing the use of Japanese pop culture, including comics and anime, as a diplomatic tool, sources said Saturday.

Japanese recognition of pop culture as basis of improving the nation's relationship is noted and guess what; anime is one of the major keys in this aspect. Now here, I can go a bit too far but there is possibility that thanks to Internet tools like broadband and YouTube, anime meme become very common and easily available through the world. It would be crazy for Japanese Foreign Ministry not to use it as tool to break some ice after all.
Posted by Unknown at 08:11 No comments: Links to this post