This is my second review on the franchise; the focus is now on Ghost in the Shell: Innocence (2004).

The specifics here, is on Batou or Bateau, who used to be a close partner of Major Kusanagi. He is still angry and resentful of his inability to save her 3 years ago, trudging on with his life without any specific aim. This time he is partnered with idealistic and steadfast public officer Togusa to investigate an incident where a girl type android or gynoid went berserk in random manner located in red light districts of Fukuoka City. These androids are specialy designed for sexual services. Which makes it more puzzling as to why it acted in such manner, led to suspension of gynoid sales in the country. Not to mention too, it is direct violation of Asimov's Rule of AI, that is no harm should be inflicted on humans.

What will lead him later on is a huge conspiracy involving certain country to the north of Japan, child smuggling, illegal ghost dubbing, unethical corporation practice and triad involvement, plus a dangerous hacker lurking in between. Here, Batou or Bateau link to his humanity is his dog which the only affection that he ever shown. In contrast, Major Kusanagi obsession with voices in her cyber brain in the first movie which makes she think that is her soul or "ghost" resonating as a proof that she is a human. The dog, in a way, is a proof that he is still human despite being 100 percent cyborg with latest technology money can buy.

Will the Major and Batou or Bateau reunited?

The background colours is very dark and foreboding, miserable yet have some spark that denotes a life trying to be sentient in sea of artificiality. The city lights is gorgeous and objects in focus is well animated to give it realism that the story atmosphere demanded.

As expected from Mamoru Oishi, the highlight of this movie is the festival parade scene in Locus Solus. This scene alone is absolute manifestation of the movie speaks about, humans as mirror of their own creation in festival of their own doing and beliefs, thrown together in their flaws and imperfections.

The art style of character is heavily influenced by Studio IG who makes TV series, Stand Alone Complex series which in my humble opinion, looked a bit cartoonish compared to stark realism approach in the 1995 movie. Generous amount of CG is used in this movie, to give it impact and feel that can be easily described as visceral reinforcing the Japanese mastery of animation in stupendous manner.

However, the movie seem to be obsessed with dog and old retro cars, the animation of these things is flawless but does raises question as to what kind of symbolism that director trying to say. The action scenes are beautiful and masterful, just look out for the Yakuza den segment especially. Mamoru Oishi is known to have a pet dog in real life and he said "experiencing full freedom" when he is with his hound. 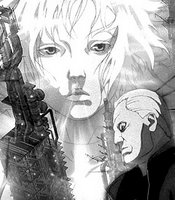 The soundtrack of this anime feature does live up to 1995 excellent OST. Suffused with synthesizer and Oriental musical in between, it creates a surrealistic feel and aftereffect complementing the scenes beautifully.

Voice acting in Japanese dubs is competent, highlights and gave soul to the characters portrayed in the anime, from stern, fatherly Aramaki to edgy, hardened Batou or Bateau; more so in latter case, because in 1995 movie, he is a smug, big man but in this feature, he is a tortured and glum personified.

The sound effects are well represented and fit the mood of the movie.

The casualty of this highly artsy approach causes alienation of the audience. Some audience might turn off by it because their inability to connect to the story due lack of knowledge of the quotes in the show representation, especially the ones who want action and less talking. This is again, a very contemplative anime, an almost Zen-like feel in its entirety. A lot of second guessing is also needed to understand what is going on, and requisite good knowledge of literature and history is seem to be in order if full understanding is needed here. Mamoru himself said that he prefers 10,000 people watching this show few times, rather than 1,000,000 people watching it once. That underscores a very personal nature of this movie and its downbeat feel too, will restrict this show to elite few who understand science fiction mixed with philosophy.

There is a score of silent scenes which some audience might find tedious since it is very personal interpretation by the director himself.

In conclusion, this is a rather difficult anime to rate, since the full impact that Mamoru desired is yet to be felt but it is can said safely that this movie deserve more than one viewing to grasp the true vision of the director. Reportedly too, this will be last Ghost in the Shell movie for the famous director. However, this anime earn its rightful place in DVD shelf for my case.

Posted by Unknown at 18:17 4 comments: Links to this post

Interesting but a bit one sided argument here.
Posted by Unknown at 08:54 5 comments: Links to this post