Noir / ノワール will be remake into live tv series. 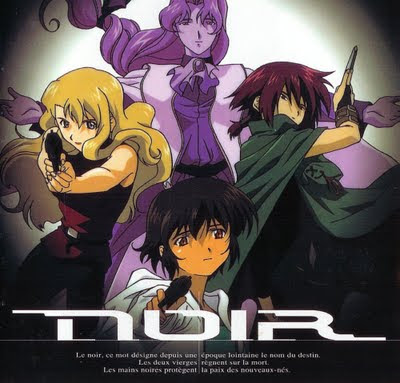 Tinseltown just got into another anime adaptation, this time is Noir / ノワール (2001) the famous Bee Train work that shows their signature slow pace and eye shot camera pan emo scenes. This anime is the progenitor to many Bee Train "chicks with gun cool killer" genre such as Madlax and Cazador. When it is came out at first, many fans hailed it as an artistic and fascinating story of semi lesbian pair of Kirika and Mirelle. However, personally I think it overstays its welcome with 26 formulaic and predictable episodes ( the music cue did not help to hide the suspense). I do liked the soundtrack a lot though. (by Yuki Kaijura no less)

Sam Raimi and Starz will be making the live action adaptation, curiously, it gave me hope since I enjoyed the visceral and bloody Spartacus: Blood and Sand immensely. So my anticipation is there as how they will approach this anime and turn it into live action series. Since it is cable company, it will be more for mature audiences and less concerned with TV censorship.

I find it interesting.

anime
Posted by Unknown at 17:47 5 comments: Links to this post