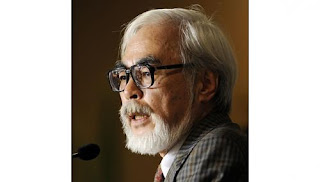 The beloved anime director, Hayao Miyazaki is announcing his retirement. I dunno if this has to do with storm of criticism against him for anti war stance that he expressed so overtly in last movie, Kaze Tachinu but the announcement has an interesting timing nevertheless. I certainly remembered that he came back after his son, Goro directed Earthsea back in 2007-2008.

One might say that his comeback is not very successful, Ponyo and Kaze Tachinu has failed to garner the applause like his best previous works - Nausicca, Spirited Away, Totoro and Mononoke Hime. Perhaps he felt he has lost his touch hence the retirement? Purely speculation from me though. Or health reasons? He will make more announcement soon at Tokyo after noted absence at Venice film festival.

No other details are known yet.

anime
Posted by Unknown at 21:29 No comments: