This sad, depressing anime set in modern Italy tells a tale of group of very young girls employed by Italian Intelligence 2nd Section which publicly known as "Social Welfare Bureau" for covert operations against government targeted killings. Broken, abandoned and often have no more hope to have a normal life, the girls were chosen to be modified into bionic operators, endowed with superlative human characteristics such as agility and strength etc by G-mans so they can be deadly assassin. Using non-popular killer memes, their idea revolves around inflitration and absolute surprise on targets before to be eliminated by the girls.

The reason why they use underaged females is because they were more obedient and less likely to rebel, compared to males especially children age. Not to mention, people tend to let their guard down since female child tend not to pose any significant threat. To control these souped up operators, each of them were assigned a controller who is responsible for well being. It is not surprising that the controllers is usually male, in order to induce love as means of control over the girls.

The story above which originally started as H-lolicon doujin by creator Yu-Aida later evolved into highly intelligent and emotional mainstream manga, serialized in monthly Dengeki Daioh tankubon (manga novels). Afterthat it was adapted by Studio Madhouse into 13 ep anime which concluded in 2003. His love for Italian architecture and weapons is noticeable, thus rendering an unique flavour to Gunslinger Girl setting. Cute and brutal, innocent yet morally dissonant, Gunslinger Girl asked essential question on what is morality and humanity means.

This anime is not for everyone, as subject matter presented here is highly disturbing. 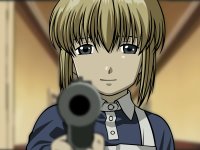 Reportedly one episode of Gunslinger Girl worth about 300,000 US Dollars in production. Even the ending song music video, there is no loop animation at all, each raindrops is animated independently. The look of characters and the surrounding environment catches the melachonlic atmosphere well, and the weapons is sufficiently animated. However slight drop in quality can be observed in episode 8-12, the sharpness and defined look established in episode 1-7, to be repeated again in final episode of the anime.

Despite some nitpickings, for TV series, the quality in art is quite consistent in general.

Background is lush and beautiful, in fact I wonder if it is intend to promote tourism in Italy. However in certain scenes, it is toned sufficiently to highlight the sombre mood. It is adequate enought to convey the beauty of Italy with its dark undertones to enchance the story setting. In emotional parts is dark, noir style and in happy scenes it is brighter than usual.

OST of GSG is awesome, it is mix of piano, violin and some other musical instruments. Being a musical illiterate person, I can say I truly enjoyed the OST. Tracks like Tema II and IV is worth the money for the album, in my opinion.

However the OP by Scottish band, Delgados is may somewhat appropiate for the anime, I cannot imagine it is a J-pop as many other animes out there. It is sad yet have fairy tale like quality in its lyrics.

The ending however is the weak link. I did not enjoy the ending theme as it is full of flaws in intonation and such. They should have look for more competent opera singer for this number.

The anime is incomplete, in the sense it only talks about Section 2 girls in detail. In tandem with manga continuity, the anime covers materials in Vol 1 and 2 with new Elsa story arc plus their own anime only wrap up. In manga story, the Republicans, main terrorist group is detailed in vol 3 and 4 as bunch of dedicated idealist who have their own code of honour and beliefs which not too different from Section 2 themselves.

Principal characters in focus are Giuseppe and Henrietta, when we first introduced to her, she is a quiet and shy girl who is prone to overreaction, thanks to her conditioning and brainwashing. Giuseppe, sensing that she needs kind and loving touch to bring out the best of her, treated her like his own sister. In progression of the anime, we can see the increasing humanization of Henrietta, from silent, morose girl to chirpy normal little girl that might be a bit unsettling to some viewers when they are aware her real purpose in being: to kill. Giuseppe have conflicting stance in training his charge as he questioned the need for such existence of Henrietta and her co-operators.

She is used as foil as more bionic operators are introduced to us in progression, the distant Rico, sisterly Triela, quiet Claes and fragile Angelica, even hostile Elsa. By mirroring their behaviour, Henrietta gives viewer a glimpse of their thinking and motivation to continue their existence.

Here I will do some ideas on characters based on John Woo's style of using gun characteristics to reveal the characters.

This anime is slow paced, melancholic and very, very subtle. If you looking for frantic and happy stuff, stay far far away from Gunslinger Girl. Humor is often non-existent or pretty bleak, in other words this anime has zero laugh factor. However, if one looks for meaningful, symbolic and deep thinking story, Gunslinger Girl has plenty to offer. Do remember, there is no way these girls will have a happy ending. Be warned. It is same thing as novel masterpieces, Dr Zhivago or War and Peace novel. It is depressing, crushing type of sadness but quite a memorable one.

Action-wise is pretty realistic but might be a bit too short for action orientated bunch.

In conclusion, I will purchase this anime on DVD. 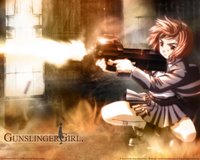