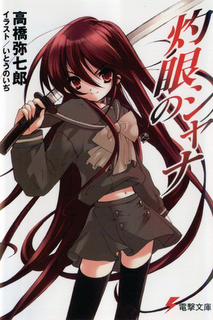 This anime talks about Yuji Sakai, a ho hum typical Japanese secondary schooler living his normal life. Suddenly out of nowhere, he was trapped in time freeze and much to his horror he facing strange entities "eating" people's essence. Uncomprehending to the new alien surrounding, he was spotted by the malevolent entity and the beings considered him quite a catch as they remarked he has a rare treasure within him. Grabbing him, ready for consumption, he was saved by another strange entity with red hot eyes and burning hair armed with ancient Japanese sword. The entity resembled a young girl and she dutifully dispatched the hungry beings while bewildered Yuji looked on. She then restored the situation and after being prodded by Yuji, she snapped that he is already dead and his existence is temporal. 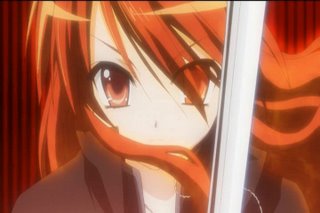 From there, he found out that the world he just witnessed is a major battlefield between denizens of the realm, one side disregarding balance of existence while the other one fought to preserve it. The person saved him has no name, hence he decided to name her Shana, the first link of humanizing her. The series went on how they become close together, how both of them grow and becoming who they are in the end of the series.

Shakugan no Shana is based on series of light novels by Yashichiro Takahashi and illustrated by Noizi Ito. It has since adapted into 24 episode anime series and a manga project. Using some elements of mysticism, sci fi and chambara traditions, this anime managed to climb out from typical magical girl with sword genre thanks to good characterization of the principal players in the story. 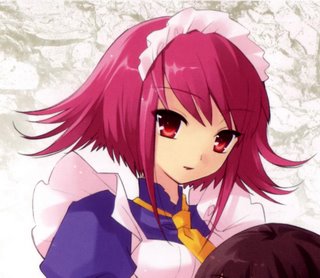 The animation and art is sufficient for the series portrayal of the characters. Nothing too fancy except for occasional CG and little bit more animation towards the end of the series. The character design reminded me a bit too much of Haruhi since they shared same illustrator but it did not detract anything from real purpose of anime should be, good storytelling. To summarize my opinion here, the art is adequate to convey what it needs to convey and nothing more. 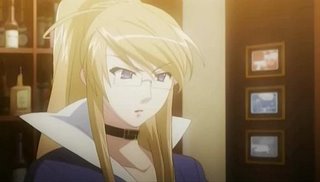 The voice actresses of series (Japanese) lived up to their reputation such Kawasumi Ayako ( Lafiel and Saber), successfully fleshing out the people as the voices is convincingly fit the character. Shana's VA Rie Kugiyama brings out her feisty spirit well and viewers really get the feel from her as a hotheaded, no holds barred warrior female.

The first OP (Hishoku no Sora by Mami Kawada) is pretty catchy and so is the first ED (Yoake Umarekuru shōjo by Yoko Takahashi). I personally however find second ED (Aka no Seijaku by Yoko Ishida) a bit weak, not as dramatic as first one which really wraps up the anime well. The second OP (Being by KOTOKO) is adequate but nothing much to shout about it.

The OST fits the mood of the show, from foreboding tunes of incoming battle to theme of Shana herself. Admittedly this is where anime shines the most. The music fits and enchances the story quite a notch. 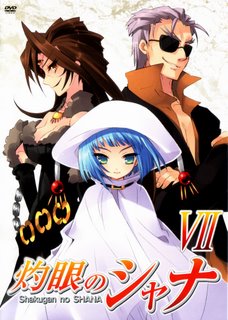 Shakugan no Shana actually takes time to develop the characters and this is what makes it different from other magical anime out there. There is only total of 1 filler episode of the rest which in my opinion a good call on director's main part to focus on story development, not moe pandering. However, I felt there is not enough backstory on villians especially Hecate esepcially her reason to be what she is in the show. She appeared in background but it is a mystery on why she is obsessed with Yuji's treasure or why she becoming what she when she appear in the anime. We all knew quite a bit about Flame Haze in 2/3 of the story but very little is known about other Denizens which called Ball Masque in the show. The first villian, Furigane also have sparse background story which makes it difficult to imagine why he is a powerful Denizen or his reason to be. Not to mention who is Bel Peol, Sydonay or the Researcher. Very little information is known about them.

I always believe that well fleshed out villian enchances the story a lot.

Some commentators accused this anime as excessive pandering of lolicon moe with Shana herself as main focus. I would have to concur with this observation but what makes this anime above average is because the story is well developed on general and main characters actually grew up as the story progresses. Thus, if viewers can look over the moe lolicons and look at the story itself, the anime actually offered a lot.

The matured ladies such as Margery and Wilhemnia have their respective role to play but I liked Margery especially as her character is very interesting to follow in my opinion. She is a flawed person which made her more compelling to watch as compared to tactiturn maid. Surprisingly, the anime devote quite a segment developing Margery which made her quite likable instead of just an irritating sidekick or villain of the week feel in the series.

I would heartily recommend this anime to casual watchers as the story is well presented, developing characters and good sound support in OST department. 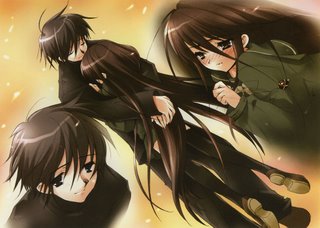 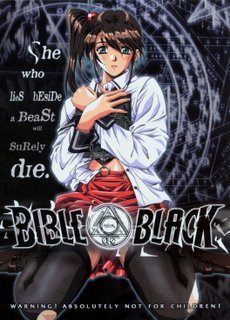 Best clip I seen from this epic neglected space opera series. Yang Weng Li (the commander who used a meteor to destroy the ship in the end) for the win. The anthem of Free Planet Alliance send tears to my eyes. I dunno why. It is just so apt, fitting the best ideal of democratic republic.

This series would be what I liked to write and create if I ever be an anime story writer.
Posted by Unknown at 12:36 No comments: Links to this post