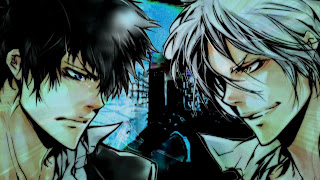 Charting a reasonable sales on BD, Production I.G decided to give Psycho Pass another go at Anime Expo on 6th July 2013, confirmed by the CEO of Production I.G, Ishikawa.  Right now, script development and production is underway as this entry is written.

Sales chart average for Psycho Pass is moderate, about 5000 copies sold for each volume so far.

For Japanese domestic market, anime series must pass the magical barrier of 3000 units on average to have a chance for sequel.

Ironically the director,  Katsuyuki Motohiro is actually squeamish on the violence level in the series, he will never allow his kids to watch this one. However he wanted to work with Gen Urobochi very badly after he watched Magica Magi Puella Madoka (2011) and Fate Zero (2011-2012) so he go ahead with the script. He encouraged the voice actors to add in quirks into the characters themselves.

So far no news if Urobuchi is back but the chances is high that he will. I think the main villain will be the system itself, Sybill. And what is going to happen to Yayoi's lesbian relationship or the unresolved sexual tension between Akane and Kogami? Questions abound.