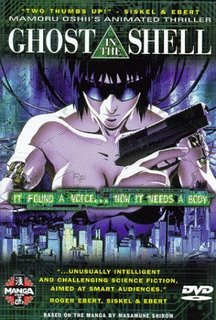 Here, I will review the Ghost in the Shell (1995) animated feature first.

Set in not too far dsytopian future of Tokyo megalopolis where technology has reach the stage where full replacement of human body is made possible by cyborg technology and more remarkably, the ability to retain human mind and consciousness in artificial brain which also can be hooked to cyberspace, directly via a port at back of the neck.

The story focused on a high level cat and mouse game between highly secretive Public Section no 9 and an elusive terrorist hacker known as Puppet Master with Foreign Ministry trying to muscle in with their own agenda. Apparently, a spate of incidents has been blamed on this infamous terrorist from commercial espionage to unauthorized hacking of sensitive government secrets using the vast world of cyberspace. Throughout the world, Puppet Master is on the top of the most wanted list for reasons above.

As expected, this anime paid huge homage to seminal cyberpunk movie by Ridley Scott, Blade Runner and also sprinkles of Gibson and Philip K Dick in forming a cohesive story and world where this characters to stage their lives in.

First we got to see Major Motoko Kusanagi, a strict, no-nonsense security officer with her sardonic partner, Batou. She works as an all purpose operator, with her enhanced cyborg body which the only remotely human vestiges is her vague memory of her humanity or in their universe, dubbed as "ghost".

However, the terrorist mastermind has his/her own very personal and basic agenda to fulfill; one that will shock even staid Motoko when it is finally revealed in the end.

The story is highly demanding in terms of audience cognitive approach, as the subject matter is often infused with rather complex existenalist philosophy. This high budgeted anime movie is definitely not for casual watching in lazy afternoon. However for those who is willing to spend time reflecting and have curiousity about what is mankind and how technology can address the issue, this anime movie is a huge delight. 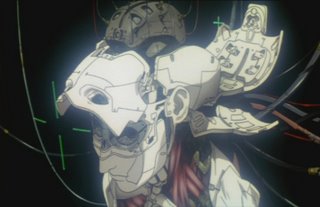 The background colours is very dark and foreboding, miserable yet have some spark that denotes a life trying to be sentient in sea of artificiality. The city lights is gorgeous and objects in focus is well animated to give it realism that the story atmosphere demanded.

Among the highlights of this movie is the scene where Major Motoko is engaging a spider tank in an abandoned warehouse scene. The whole sequence and animation is breathtaking and poetic at the same time.

Music is arranged by Kenji Kawai, the most memorable piece is "Making of the Cyborg" which suffused with Oriental with modern synthesizer piece to give it unique flavour. In the movie, the variation of this piece never gets old since this anime is very introspective. The background music complements scenes nicely and overall a superlative experience to listen to.

Voice acting in Japanese and English dubs is competent, highlighting and gave soul to the characters portrayed in the anime, from stern Aramaki to smug, repressed Batou. The sound effects are well represented and fit the mood of the movie.

The movie relies on visual narration and bucket loads of montage shots to push the plot forward. Action sequence is few and serves as plot device to put the story in bigger perspective. It is meant as serious work and it shows. No panty shots, no silly jokes or any conventional anime relief. All serious, no holes barred realistic plus very detailed anime. Just look at the scene when the terrorist prepare himself to pump out hail of high velocity AP rounds to understand my last statement.

Many times, in the course of the movie, the director; Mamoru Oishi asked the audience to ponder what humanity is and what it means with his signature visual symbolisms from quiet walk in the city to long monologue by the principal character in the scuba diving scene. Silence is meant to be filled with audienceâ��s own thoughts, and Oishi use it in spades in narration of the story.

The casualty of this highly artsy approach is however, pacing. Some audience might turn off by the sheer tepid pacing the anime presents, especially the ones who want action. This is a very contemplative anime, an almost Zen-like feel in its entirety. A lot of second guessing is also needed to understand what is going on, which can be quite frustrating to some especially the ending which never made clear as the ultimate fate of Major especially.

However, in no way this animated movie can be dismissed as it influences many follow-ups in late 90s and early 2000 anime shows, maybe not as influential as Evangelion but the impact is still felt, even today.

In conclusion, this is a seminal cyberpunk representation, whether it is anime or not, still a major work in the genre. I proudly own the original DVD and some art books related to this anime, never regretting it. 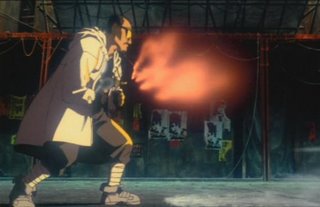