Look at the sheer beauty of this scene. No run-of-the-mill mangaka can pull this kinda stuff. It requires patience, passion and love for the craft to produce this kind of detailing (the fabric weaves and patterns are behold to look at). Kaoru Mori, famous for her work in Shirley and Emma (both set in Victorian era England) is penning this story about Central Asia newly wed couple in slice of life story. I suspect it is situated in Kazakhstan based on costumes the manga shown so far (all the hints: is the story is based on Silk Road life in 19th or early 20th century and an off hand comment that "people of the north" are encroaching on their life which sounds like Russians asserting their power over the steppe nomads). The story pacing is slow so far (as expected from her work) but the historical detailing is pretty high standard if anyone reads Emma can remember.

The videos showing stage by stage work of the art. Lots of slow, painstaking stuff here. This Japanese website have more details on this. Amazon Japan is selling the 1st volume. This is kinda stuff that gives me reason why I love art and drawing in 1st place. 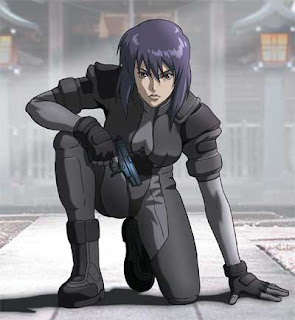 Laeta Kalogridis is the new scriptwriter for current 3D project of highly anticipated (or highly dreaded) project Ghost in the Shell adaptation to silver screen. In her filmology, she is also wrote for Pathfinder (yuck, remember whale blubber is explosive) and Alexander (so so only)Jamie Moss is the 1st writer for the project. I liked Jamie's work in Street Kings (awesome movie).

However! I do notice she is credited as co-writer for planned James Cameron (a notorious perfectionist) project Battle Angel. Battle Angel is Cameron's adaptation of Battle Angel Alitta mangas, I suspect he is waiting to see audience's reaction to Avatar scheduled to be aired later this year for any decisions regarding about Battle Angel.

However it still remains up in the air if Ghost in the Shell movie will take off or not. I wish to see how Hollywood interpret this work, to be honest. With Dreamworks providing the firepower, it is pretty likely this project will be interesting and become a reality instead stuck in development hell. Hopefully.