'Paprika' spices up the anime aesthetic 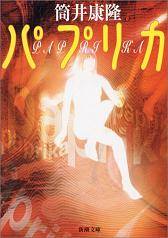 4 stars out of five

The opening minutes of Paprika introduce the pivotal character of police detective Konakawa (voiced by Akio Otuska), and his recurring nightmare, which revolves around the spliced-and-looped discovery of a homicide victim.

Director Satoshi Kon then undercuts this traumatic vignette with references to a roll call of Hollywood standards, like Cecil B. DeMille's The Greatest Show on Earth, Tarzan the Ape Man, Roman Holiday, and Hitchcock's Strangers on a Train, all rolled up into one sweet dream sequence. 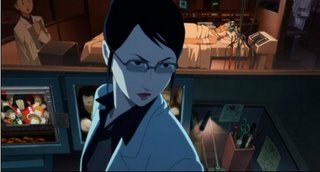 I am looking forward to this anime, hoping that it will not as deary as Millennium Actress. The visuals are great but the anime movie lacks the punch to carry it thru the usual film mediocrity ceiling. For me, an anime film must have something more special besides pretty pictures. Same problem goes for GONZO's Agito, Spirits of Origin which suffered from lack of plot coherence despite the poetic beauty of its animation. 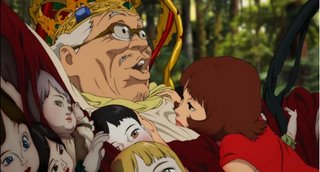 It seems to me that basic issue of anime films mostly too art focused, forgetting the story in return. Hence the reason why Miyazaki films doing so well because he did not neglect characters.
Posted by Unknown at 05:26 No comments: Links to this post