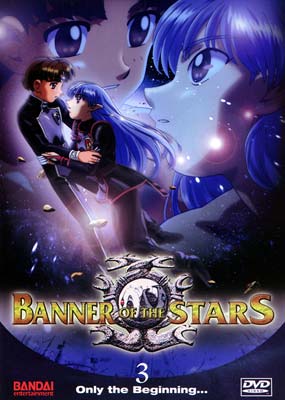 These 13 episodes are continuation of Morioka’s universe established in 1999 anime series, Seikai no Monshou or Crest of the Stars. This time, the war is on between United Mankind and Abh Imperial Empire; the decisive battle will be fought in Planar Gate of Apptiku. The United Mankind sent their best fleet and their best weapon in all or nothing offensive while the Abh Space Force concentrate their fleet to stop off the massive attack. The rest of Imperial empire has yet to mobilize their entire fleet so if the offensive is successful, the United Mankind will penetrate and cause havoc in Imperial domain unchecked.

3 years after the end of first series, love pair Jinto/Ghintec and Lafiel/Lamhirh serving on a assault boat, participating in the Apptiku campaign. She resented that her beloved treated her like a needy person, whereas Jinto/Ghintec was torn between duty and relationship since she is his nominal superior in the assault gunboat. Viewers will be treated 13 episodes of non-stop space combat (yes, 13 episodes non stop) while the bond between 2 principle characters grew as being tested in danger again.

New characters will introduced in this series, mainly the twin brothers who commanded the Abh fleet in the Apptiku campaign. 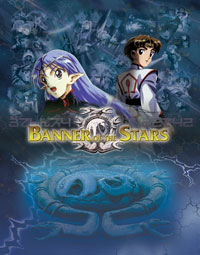 Well, the art this time has notched up little bit and since there is massive battles, some stock animation was used briefly. However it is not really distracting and majority of art is face shots of characters in dialogue exchanges in the story. The main strength of the anime is again, not art so there is nothing really special here to shout about.

Some CGs was used but not on massive scale like GONZO works.

The series BGM is follow on of the previous series and there is nothing really unique soundtrack pieces in this one compared to the first series. As usual, the Japanese voice acting are very competent in their respective roles, Lafiel/Lamhirh carries the series again with her commanding presence thanks to her stellar VA, Kawasumi Ayako.

Now, some people complained that this series focused too much on the twin brothers who commanded the Abh fleet in the Apptiku campaign. Some dialogue exchanges can be tedious but not overwhelmingly so. The discourse between Bilbos brothers who formed the top command of Abh Space Navy in Apptiku campaign has been characterized by some people as self indulgent. I believe this is to show the peculiarity of their lineage as contrast to Abriel stoic front which worked well. The creator intend to show that Abhs are unique individuals despite being depicted as homogeneous race bent to making other humans in known galaxy same as them.

Battle is epic but however did not show enough 4 dimensional aspect of space combat. Most of the engagement was in traditional form of naval warfare, not really a progression of 4 D space battles which beautifully shown in Starship Operators (2005). That in my opinion is great flaw in technical aspect of the story. This series intend to show the relationship between prinicipal characters become stronger especially after this campaign where there is saying where death brushes tend to brings out the best or worst emotions out of a person. 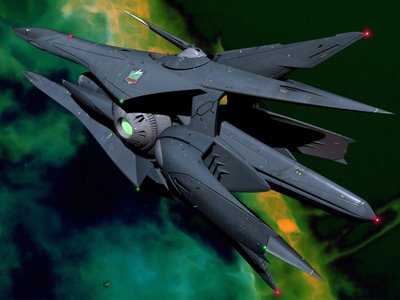 Posted by Unknown at 15:36 No comments: Links to this post 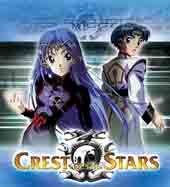 Story & Characters
Here I will review Crest of the Stars also known as Seikai no Monshu to anime fans around the world.

It chronicles the tale of an intergalactic empire known as Abh whom their origins used to be slave workers for early space explorers who rebel and become independent empire on their own as time goes by. Their biological construct uniqueness is an addition of another sensory organ that enabled them to feel their way around in vast space plus their biological life is extended to 200 years to sustain a long journey in harsh space. The hedonistic nature of their creators also implied when the Abhs will never age and all of them is supposedly beautiful humans with blue hair. I will leave to reader's imagination as to what the last purpose for.

The Abhs is not interested to conquer the actual planets itself, but rather they wanted exclusive control of space routes around the planets for space travelling purposes, especially the control of worm gates or called planar gates in this story.

One of the planet colonized by humans, known as Martine is Anglo based culture which recently conquered by the Imperial Abh Empire in the beginning of the story. The leader of the planet was raised into nobility much to the chagrin of the populace and his son is the next on the line, to succeed him as Duke. On the day of him joining the Abh's Star Force, he will meet a person that would forever change his life.

Lafiel, a princess from Abriel clan is a recruit on a frigate who volunteered to pick up heir to Martin dukedom, Jinto from a spaceport. She is proud, strong and can be conceited as sharp contrast to kind, accommodating and patient Jinto. Both of them started on rather interesting place on the fact that Jinto insisted to call her by her personal name which made her very happy as she interprets it as he did not regard her as a royalty to be feared but a common friend that she longs for.

This relationship will bloom further in the background of impending war between the Abh Empire and United Mankind, a group of intergalactic superpowers who is opposed to ways of Abh. The United Mankind, much quite similar to today's United Nations is conglomerate of superpowers who cherish natural human birth and disdained Abh's genetic manipulation, looking for pretext to declare war on Abh.

What make this story remarkable is author's attempt to flesh out the culture of Abh including creation of Baronh, language of the Abhs with complete writing and numerical symbolisms. The background is rich and almost limitless, thanks to adroit writing by Morioka Hiroyuki, novelist of the Seikai series.

Art
The art of the series is quite minimalist, given most of the time is just unfanciful headshots and lots of dialogue between character. However sometimes it has weird angle shots on certain torsos of the Abh, notably Lafiel which I interpret as sexual transistor scenes to relieve the boredom of long talks which occupies the onus of the series.

Background is pretty sufficient for its purpose, battles is good enough to be seen as battles. Every sprite is not wasted on fanciful things, it is just enough and it is there to fulfil the purpose of the story. Character's face is bordering on simplicity especially Lafiel, not too much for my liking but it is enough.

All in all, there is nothing exception on art department 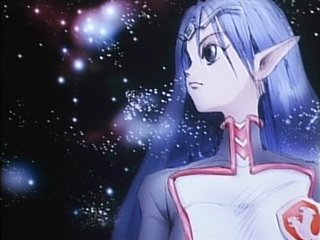 The background music of series hinged heavily on orchestral scores and quiet background as dialogue played a major role in the anime. Some scenes need extra oomph which where this piece of effective music comes in and supplant it as those scene to rely on art alone will be bland and a bit uninspiring. Some scores is bit overused but it is not really a big issue in the 13 episode series.

The opening is evocative of grand epic atmosphere which did real justice to the vastness of space opera story in Seikai no Monshu but unfortunately the ending score is bit off, as it did not really wrap up the series in proper mood.

The OST of the series is not bad but nothing really stands out except for the opening score.

Voice acting in Japanese is very competent as usual and it is quite a joy to see Kawasumi Ayako (Saber from Fate/Stay Night 2006) playing her role as Lafiel/Lamhirh well. She alone carry the show well, complimented by expected skillful voice actings from other actors and actresses. 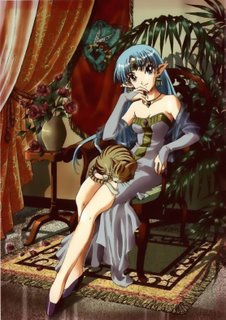 The fact this anime become one of the most beloved series to many serious anime fans who truly appreciated its sheer complexity despite rather minimalist art and music department, is testimony to it's raw power of good writing, powerful script and convincing characters.

Seikai no Monshu deserves many second viewing as many nuances of story is missed during first time watching it. The story has many layers of complicated character, setting and political implications that fans will be delighted when they have revelation during second viewings.

It is not surprise that many mainstream anime fans give it a wide berth as there is no cool action or fox ninjas in the series but seasoned veteran anime fans will like it as it did not insult viewer's intelligence while presenting the material. Many things is implied and left to interpretation of viewers instead of being spoon fed in entirety. The dialogues is good and carries a big weight so much so that it is the sole difference of it from the rest of forgettable anime series in the market right now.

The stellar cast also did not disappoint as not only the voices suits the character in play, they also interesting by themselves. Seldom there is anime where side characters have received as much attention as the main characters as this one. Illuminating interactions between Admiral Spoor and Lafiel, despite it is being short and simple did illustrate many things in context of Abh culture if viewer willing to take it beyond the surface level of conversation.

This series is worthy introduction into Morioka Hiroyuki's work and it will sit on my DVD shelf as proud as the Abh themselves. Daiselle! 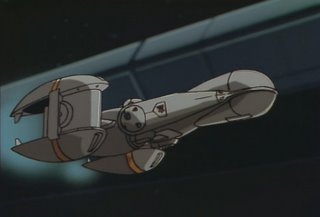 For the son of a world-famous animator who has faced opposition from even his father, Goro Miyazaki has been remarkably cool about tackling a major project of Studio Ghibli, the animated fantasy feature Gedo Senki – his film debut, writes TOKIKO OBA

GORO Miyazaki has some good reasons to feel under pressure. He’s director of Gedo Senki (Tales from Earthsea), the latest feature from Studio Ghibli, one of the world’s most important animation studios, despite being a complete novice: The movie, based on a best-selling book by Ursula K. Le Guin, marks his film production and directorial debuts. If that isn’t pressure enough, he also has the towering reputation of his father and Ghibli head, Hayao Miyazaki, hanging over him.

To make matters tougher still, the 65-year-old Miyazaki senior initially voiced strong opposition to his son’s involvement in the project. So how has he been dealing with the pressure?

It is difficult to have a brillant dad moreso in the same field that you trying to make a living. I have yet to watch Gedo Senki, but so I heard it is pretty faithful to the material.....however no conclusions can be make since the movie is not seen by me so far.

Will comment more on this if I got to watch it.
Posted by Unknown at 14:16 No comments: Links to this post