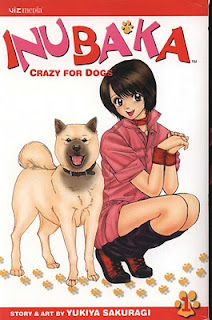 For past 1 month I have been reading this manga slowly. My verdict so far?

The mangaka is obviously a big time dog lover, while the characters were quite generic in presentation; the dogs were given such lavish and detailed drawings. She is more interested in depicting earthly realism of people's relationship with mongrel pets, likes to pay attention to issues of adopting a dog as part of life in modern Japan. This is what escalates this seemingly dog centric manga into more interesting read since it focuses on the humans more instead of spending time on dog fetishism. The characters are alright but the male lead is kinda annoying to me though. He just rubs me in wrong way. Lupin, the heroine's dog is pretty funny though.

Sprinkled with occasional fan service (which is pretty mild for me) and off beat humor, the manga promises a slow but interesting read for casual fans, hardcore fans might find it a bit too mundane though. The mangaka did not mince words about mortality of pet dogs too unlike Hollywood's big taboo about depicting dead dog in the movies (I mean there is even a movie about dogs go to heaven made in Hollywood). That is what clinches this manga for me. The author did veer into more spiritual factor of the relationship which many dog owners will insist it did happen.

I would endorse this manga for casual readers, buy it or rent it. Hardcore, very specialized manga reader might give this a miss though.