Yes I am a slowpoke. Besides that, this intrigues me a lot...no Miyazaki (Goro or Hayao) involved. What is going on? Ponyo and Tales of Earthsea not doing too well? The illustrious dynasty is on retreat from anime movie making world? Just a speculation here though.

Hiromasa Yonebayashi, 36 animator will be helming this movie. Reading his history, it sounds like he is involved in most of Studio Ghibli movies. The trailer showcased lush background, predictably.

Based on 1952 award winning English novel, this movie shifted the story background to 2010 era Japan instead. Some little people borrowed a space from human inhabitants specifically under the house, lived in blissful life without being noticed. However this changed when a human boy stumbles on one of the little people, Arriety.

There is always something magical about Ghibli (John Lasseter from Pixar thinks so too - check his tribute to Totoro in Toy Story 3) so I will check this movie out. Definitely. Coming soon in Japan on 17 July 2010. 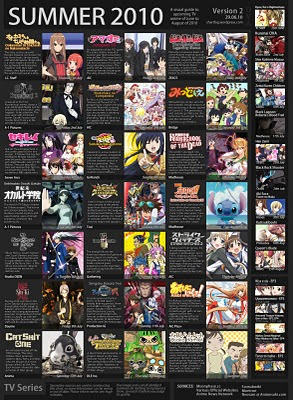 Oh man, slim pickings for me this time. I am only interested to watch 2 of the lineup so far. Am I too jaded already?

anime
Posted by Unknown at 02:51 2 comments: Links to this post