The service will initially offer 30 titles, including a collection of "Ge Ge Ge no Kitaro" by Shigeru Mizuki, in their original and Chinese-language versions, the Tokyo-based company said.

About time mainstream companies using technology to promote mangas. I wondered why it is so tardy for them to catch up and play the same game field as scanlators. Was it laziness or adversiness to new tech?

On related on article...

BitTorrent plans to open an online movie store to sell foreign films and other hard-to-find video, including content from China, Japan and India.

Full article is here.
Posted by Unknown at 09:18 No comments: Links to this post 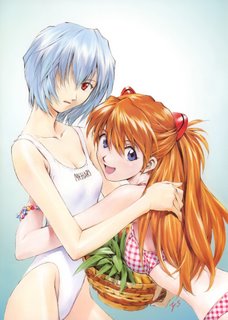 Following close on the heels of Monday's news about four new Neon Genesis Evangelion anime movies comes a more concrete and substantial report on the project, thanks to the ever-present Variety. The four new films will be released in a semi-staggered order, with the first film hitting Japanese theaters in July of next year, the second in January, and the third and fourth (as a double-bonus release) sometime in the summer of '08

Personally I felt this is a one big dead horse. I wondered why GAINAX keep beating it since they certainly capable of producing non Evangelion anime which is good like Furi Kuri.

However, it remains to be seen if the movies can live up to the promise of enchancing one of the seminal anime in our time. Anime was never the same after Evangelion (1997).
Posted by Unknown at 09:09 No comments: Links to this post